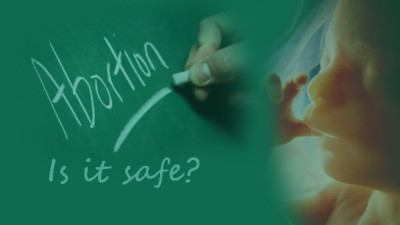 I was reading a newspaper and suddenly my eyes went on a words “Safe Abortion”, I was like “IS ABORTION SAFE?” How can an abortion be safe if it involves death in it? Article mostly talked about death rate or complication girls or mothers have to face after abortion that was done in unauthorized center or people. It further emphasized on making mothers aware about not to abort their babies from unauthorized person. From this article it can be clearly seen that there is no prohibition in abortion.

As we all know abortion is the termination of pregnancy by the removal or expulsion from the uterus of a fetus or embryo or a “BABY”. Termination means the ending or finishing and definitely in case of pregnancy finishing the life of baby that is growing inside. How come people forgot abortion doesn’t only involve mother but also a child?

Some of the dreadful techniques that so called legal or trained person use during abortion are:
Menstrual extraction, just an 8 week baby is taken out of mother’s womb with small tube which sucks the baby out. Most common type of abortion used is Suction aspiration where babies are cut into pieces and sucked through the tube into a bottle and then discarded. Dilation and evacuation used up to 18 weeks; a pair of forceps is inserted into the mother’s womb to grasp part of the baby. The teeth of the forceps twist and tear the bones of the unborn child. There spines and skull are crushed in order to remove. Salt poisoning, babies are poisoned with strong salt solution which bring death to them. There are other ways too but all of which leads to death of a child.

Abortion is definitely not safe for child so is it safe for mother then? A big NO NO. It has never been safe and will never be safe.

Dr. Beverly McMillan is an obstetrician and gynecologist. In 1975, she became the first woman to open an abortion clinic in Mississippi. She stopped doing abortions in 1978 when she found out that the abortions she was performing were causing everyone involved far more harm than good. Some physical complication she mentioned are: excessive bleeding, intense pain, coma, incomplete removal of baby or placenta (which can cause life threatening infections or sterility) and even death. It can also result in blockage of fallopian tubes and damage to reproductive organs that can make it difficult to conceive or carry a child to term in the future. Girls even if you want to give birth later or when you think you are ready you won’t be able to, then what?

In Nepal abortions are made legal since 2002. But it doesn’t mean it is safe. We can see most of the government policies, organizations are promoting abortions which I think is leading many young girls and even boys to think that their mistakes can be solved within a few minutes. It shouldn’t be about promoting safe abortions. Instead we can promote sex after marriage, or counseling classes for girls or parents who are thinking about abortion. In abortion we are sure of child’s death but we are still not able to say that mother’s life will be safe completely. In spite of the complication mentioned above, if they say abortion is safe then I can’t really tell what the hell is unsafe.

There is some unavoidable term if we are talking about abortion “Rape” where women conceive without their will. It’s very hard for women to carry a baby which is a fruit of rape. So most of choose to abort instead of giving birth.

Why should that innocent baby pay for his father’s crime? Isn’t the baby inside her womb equally hers? We talk about child rights, we fight against child abuse or child related things then where is the right of a child who is inside the womb, who is not even able to defense for themselves? These are the questions that I would like to ask all who says abortion is now SAFE.

Many might argue that the babies or fetus don’t have life when it is inside. For their information, life forms right after sperm meets ovum. Though it can’t be seen from our eyes, but you believe it or not it is the beginning of new life. We don’t have right to kill anybody. We are not to judge who is to stay or who is to leave because one day when we will be judged we won’t have any answers for justification.

God creates life and every life is precious to God. And by life it also means the life of a baby growing inside the mother’s womb. Psalm 22:9-10 beautifully leads us to the gratefulness of the unborn baby towards God. It says, “Yet you brought me out of the womb; you made me trust in you, even at my mother’s breast. From the birth I was cast on you; from my mother’s womb you have been my God.” It clearly shows us, from the beginning it is God who has the ownership, not us. We are only the part of it to bring God glory. Many obstacles we might have to face but the key point is to trust Him as He had taught us when we were still in our mother’s womb. Don’t forget each life is a gift of God.

Youth Circle is a group of, you guessed it, youth! We aim to create a generation of youth passionate about Jesus Christ by proclaiming Christ through art, media and community.
Contact us: [email protected]
Copyright © 2017 Youth Circle. All Rights Reserved.
MORE STORIES